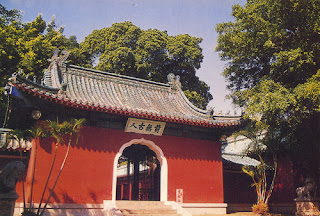 Here is a red-walled shrine dedicated to the warrior Koxinga. It was sent by a Taiwanese postcrosser who believes that Taiwan is a great please to learn about Chinese culture. Interestingly, Koxinga was a Chinese military leader born in Hirado, Japan.
Posted by Mrpotani at 7:38 PM 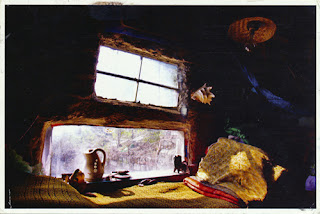 This postcrosser from the Ukraine recently became a mother and remarked on what a miracle it is to have a child. What a lovely sentiment. I was taken by this mysterious room. The lampshade seems to be made with a bamboo sieve, there's a conch affixed to the wall, a pitcher and cups by the window, a rather scratchy looking coverlet and pillow, and a glimpse of apartments and houses outside the dirty window. I don't know if this is simply a postcard of a humble room or someone's famous abode.
Posted by Mrpotani at 7:31 PM 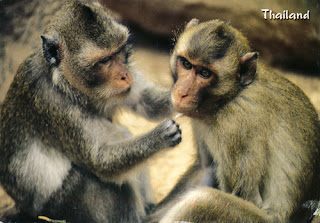 This Thai card is actually from a Taiwan postcrosser.  A sweet card of  monkeys doing what monkeys like, which is to groom the itchy and scaly stuff off their friends. Monkeys are also associated with Hindu Ramayana stories but this writer went off-topic and talked about the August Ghost Festival. Apparently the gates of Hell opens then and ghosts of all kinds rush out to be amongst the living. The Japanese celebrate the dead in August with Obon, but I don't recall that it had this terrifying element to it. 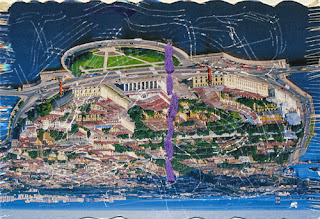 When a card gets this worked over, it forms its own gravity. I love the markings across the card, which remind me of trails left by motor boats. Also effective are the waves and fringes cut on the edges. The purple thread was interesting touch as well. This is a card from a postcrosser in St. Petersburg. The Vasilyevsky Island, is an island in St Petersburg, bordered by the Bolshaya Neva and Malaya Neva rivers.
Posted by Mrpotani at 12:56 PM 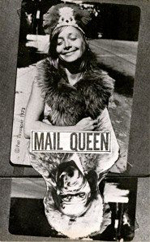 Patricia Tavenner passed away on May 10, 2013 in Oakland, California.
In the 1960's, Tavenner moved from Michigan to Northern California and pursued graduate studies at the California College of Arts and Crafts and University of
California, Berkeley. She was an early participant in the formation of the Women's Caucus for Art, organizing pickets with other feminists at museums in the San Francisco Bay Area and helped form the Northern California Women's Caucus for Art in 1972.
Tavenner was a photo silkscreen artist, a member of the Bay Area Dadaist scene and a well-known mail artist. She defined mail art as anything that comes through the mail, a medium that sidesteps the restrictions of traditional art and expands the definition of Artist. As an active member of the counterculture, Tavenner wrote and published a zine called Mail Order Art in the early 70's and taught classes on "the secret history of women artists." She was a long-time instructor of art at UC Berkeley Extension. 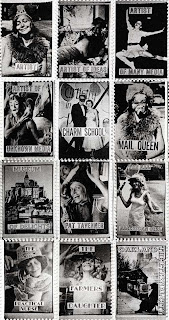 Tavenner discovered artistamps while searching for new media. She found a shop in Philadelphia that could take any image and make a sheet of gummed and perforated photostamps. She was delighted by the beautiful sheet of perforated images. As an artistamp artist she earned the moniker, "Mail Queen." She was involved in a network of artists who traded stamps as children would baseball cards. Her artistamps were exhibited at the Davidson Gallery in Seattle (1989), Sonoma County Museum (2003), Budapest International Artistamp Show (2006)and featured in books about artistamps.

I took a photo-silkscreening class from Tavenner nearly a decade ago and learned about her involvement in artistamps and mail art through her class. What she did with mail art fascinated me, but she was a little shy about sharing her techniques. Mail art was a radical, fringe art medium in the height of the Fluxus Movement in the 1970's and even today continues to be practiced in an underground fashion. Mail, in general, seems to be a nearly extinct form of communication in this day of emails Facebook, texting and Instagrams. I hope the fringe practiioners continue to nurture the next generation of eccentrics who enjoy sending a beautiful piece of art through the mail.

For more info, view this YouTube video: http://www.youtube.com/watch?v=ON0ln2gYh9o
Posted by Mrpotani at 12:45 PM 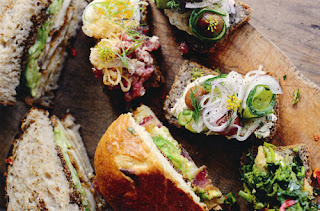 Here's a yummy card from Susan. What a lovely grouping of vegetarian sandwiches! We are lucky to live in the Bay Area where there are so many wonderful bakeries and farmer's markets that supply the freshest and tastiest local produce. This week I will make guacamole with the small avocados I picked up at the farmer's market together with tomatillo salsa, cilantro and cotija cheese.
Posted by Mrpotani at 9:04 PM 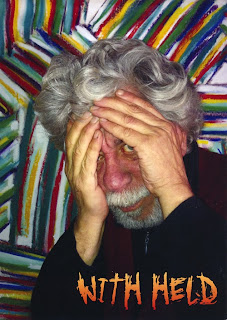 Picked up this postcard from the Exit Theater in the Tenderloin. The Fringe Festival is underway and we went to a short play there called With Held, by playwright and monologist Jeremy Greco. The play is about the life & times of John Held Jr., a mail artist. At first I thought it was a spoof of a sexually promiscuous male artist, but each vignette contained moments of humor and pathos. Afterwards went out for Chinese dinner with Held and several interesting artist friends. The restaurant was noisy and not conducive to much conversation, but I learned that he knew Patricia Tavenner and that he was organizing her collection of mail art. More about Tavenner later...

Here's a YouTube video to watch: http://www.youtube.com/watch?v=BZsjJExwF_o
Posted by Mrpotani at 7:51 PM 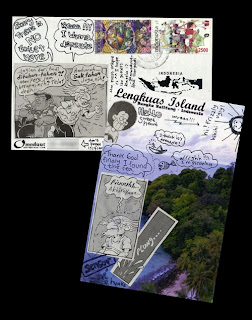 This Indonesian postcrosser sent this sophomoric humor card from Lengkuas Island. This tiny island is known for its lighthouse and proximity to other islands made of granite. The cartoons reminded me of the old Zap Comix of the 70's.
Posted by Mrpotani at 8:50 PM 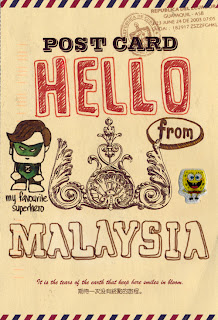 A Malaysian postcrosser doodled on this card in between a programming lab test. It helped while away her boredom. The character on the left is her favorite superhero. It looks quite a bit like the Green Lantern. Is it though?
Posted by Mrpotani at 8:37 PM